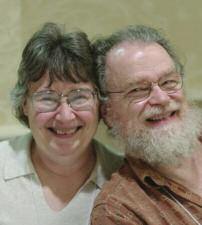 AT THE LAST TORONTO CONVENTION IN 1994, Bob and Dee Stewart brought an outstandingly novel plant for show, all the way from New England. It was a single-leaf Streptocarpus, S. cooperi, in flower and mounted on a slab of bark, and (in those days of little airplane security) was carried on the laps of the exhibitors all the way. It won Best in Show. Long before then, and ever since, Bob and Dee have continuously advanced our collective understanding of many of the most interesting gesneriads. Their extensive greenhouse-based collection of some of the more exotic gesneriads in cultivation has been a source of wonder and insight for many of us. They are always generous with their time and knowledge, and with the beautiful photographs they have taken of their plants. And they continue to grow and study that most interesting group of plants, the Streptocarpus species. There are over 150 species of Streptocarpus known. The genus has provided many beautiful and floriferous plants for our enjoyment, with modern hybrids in the homes of many casual growers, as well as in the collections of specialists. Some of the most interesting plants in Streptocarpus, though, are in the extensive roster of species. These include tiny thimble-growing plants as well as enormous single-leafed giants. Bob and Dee’s program will focus on these species. The very unusual growth habit of the genus will be addressed, as understanding this is the basis for successful growing. The program will review the unique aspects of the Streptocarpus life cycle, with illustrations from both live plant material and photographs. This understanding will be the basis for a discussion on how to grow these plants successfully, including growing them without pots – nature’s way! Along the way, you’ll see many of the species that make this genus so popular. 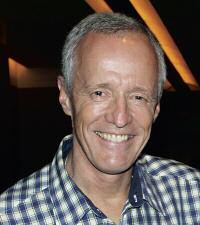 OVER THE PAST DECADE AND MORE, BILL PRICE has been a dominant force at both gesneriad and African violet shows. In the space of ten years he has won Best in Show and Sweepstakes five times each at Gesneriad Society conventions, and was shut out of both awards only three times. He has won Best in Show three times at AVSA conventions, and numerous awards at other events and local shows. He is truly one of the very best growers we have. Bill also finds time to maintain a busy professional practice as a psychiatrist, and is a warm and generous individual. He is always ready to help fellow growers, and is a wealth of information on all the newest and most interesting plants, and how to grow them to perfection. For the 2013 Convention, Bill has agreed to speak on his growing and show preparation techniques. His talk will feature an extensive slide presentation of a wide variety of the gesneriad genera that he grows. He will focus on growing the lesser-known or rare species, and will discuss what he has learned about their varied cultural requirements and how he meets those needs. He will also talk about his year-round routine, and what he does to select and prepare plants for show.

John L. Clark: “The Natural History of Pollinators, Pouches, and Upside-down Flowers in the Gesneriaceae”

DR. JOHN L. CLARK IS AN ASSOCIATE PROFESSOR in the University of Alabama’s Department of Biological Sciences. Research conducted by John and his students emphasizes
biodiversity through field and lab-based approaches, and addresses phylogeny, pollination biology, biogeography and ecology. Much of that research focuses on the Gesneriaceae, and his lab has been the recipient of numerous grants from the Gesneriad Society. John’s broad interests allow him to combine a variety of scientific approaches, such as DNA sequencing, field observations and surveys, and manipulative experiments, all helping to explain the evolutionary history and ecology of the plant groups at the center of his research. He has conducted research throughout the New World tropics, especially in Ecuador, Peru, Bolivia, Colombia and Cuba, and these projects have markedly advanced understanding of the distribution, taxonomy, and evolutionary relationships within the groups that he has studied, many of which are critically endangered. Since Darwin’s insights on the development of species through natural selection, naturalists and biologists have used patterns in the variation of the physical appearance and structures of species in order to make inferences about relationships and evolutionary processes. Traditional classifications based on these inferences, however, are often artificial and misleading because they do not accurately reflect evolutionary history. The pouched flowers often seen in the Gesneriaceae are one example. While once thought to be a feature of closely related species, with perhaps a single evolutionary origin, John’s research suggests that pouched flowers have been independently derived in many unrelated lineages. John’s talk, prodigiously illustrated with photos from his extensive field research, will address the adaptations of floral forms that have evolved in response to plant-pollinator interactions, with particular focus on those curious pouched and upside-down flowers. 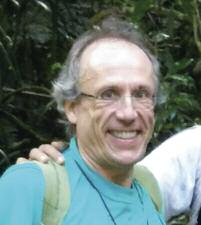 DR. ALAIN CHAUTEMS HAS BEEN STUDYING THE neotropical Gesneriaceae for more than 25 years. He has worked on the ground in Brazil during his post-doctoral research, studying the ecology of epiphytic plants and the taxonomy of Gesneriaceae, and subsequently at the Smithsonian Institution where he worked on the genus Sinningia and collaborated with Larry Skog. He has continued his extensive engagement with the Sinningieae ever since, and is completing a substantial review of relationships within the group in partnership with Mauro Peixoto for numerous field trips in Brazil, and Mathieu Perret (his former PhD student) for DNA analysis. He is currently a botanical curator at the Geneva Botanical Garden in Switzerland. The Brazilian genera Paliavana, Sinningia, and Vanhouttea include over 90 species and show an extreme diversity of plant morphologies, varying from microminiature plants to shrubs of over two meters. Collectively, they display all kinds of flower shapes, sizes, and colors. Sinningia in particular has become one of the most prized genera within the Gesneriaceae, and its species and hybrids are widely grown and very important in commercial horticulture as well as with hobbyist and specialist growers. Despite their extreme diversity, these genera, based on molecular data, form a distinct and well-supported tribe, the Sinningieae, which can be divided into several lineages that are named clades in molecular terminology. Some of these clades are well-supported and morphologically coherent, but others do not seem totally congruent with the currently accepted genera. Alain will present a proposal for a reorganization of the tribe Sinningieae, incorporating recently discovered species or new information on ecology or distribution of already known species. Evolution in Sinningieae seems to have involved a striking morphologic inventiveness that looks like a never-ending process. Specific points will be illustrated with reference to the plants that Alain has been studying over the past several years, making for an interesting and engaging presentation.