Gesneriad Treasures in the Sunshine State
June 30 to July 4, 2020 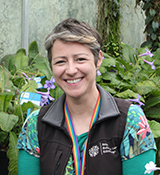 Sadie Barber, Research Collections and Project Manager at the Royal Botanic Garden Edinburgh (RBGE), will look back at the history of growing and studying gesneriads at the institution which celebrates its 350th birthday this year, and how the work of the horticulturists and scientists have contributed to the understanding of this special group of plants. The Garden has particular strength in growing Old World Gesneriaceae and currently the research focuses primarily on Streptocarpus, with current studies into genera Oreocharis, Paraboea, Cyrtandra, and Aeschynanthus.
Sadie Barber has been working at RBGE for 13 years, with a recent year out to train in Public Garden Leadership as a Fellow at Longwood Gardens, Pennsylvania, USA. Before entering the world of horticulture, Sadie enjoyed a variety of adventures including working as a photographer, chef, and training to be a safari guide while living in Zambia. Her time in horticulture has also been an adventure with travels to the Middle East, USA, Southern Africa, and South East Asia for horticulture training and field collecting. In 2019 she took time out from her training at Longwood Gardens to speak to a number of Gesneriad Society chapters, as well as at Selby Gardens in Sarasota, Florida. 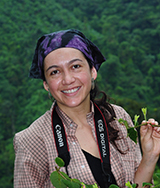 Laura Clavijo – “Diversification of Gesneriaceae in the Northern Andes and the Chocó Biogeographic Region: Drymonia as a Case Study”

Laura Clavijo is the head of research at the Joaquín Antonio Uribe Botanical Garden in Medellín, Colombia, where she works along with conservationists to implement in-situ and ex-situ strategies to conserve species of the Colombian flora that are endangered. In her presentation, Laura will discuss how a combination of biotic (e.g., pollinator interactions) and abiotic (e.g., environmental changes resulting from the uplift of the Andes) factors have played a primary role in the diversification of the neotropical Gesneriaceae. These factors may explain why Drymonia and other genera (such as Columnea and Glossoloma) are so diverse in this region.
Laura is a Colombian botanist with a biology degree from the Universidad Nacional de Colombia and a PhD from the University of Alabama, where she studied the systematics of the Neotropical genus Drymonia under the supervision of Dr. John L. Clark. Laura is the 2019 recipient of the Elvin McDonald Research Endowment (EMREF) grant and the 2011 and 2010 recipient of the Nellie D. Sleeth Scholarship and EMREF grant (respectively) for her work with Drymonia. 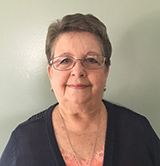 Have you ever seen those “strange” looking leaves or flowers of African violets and wondered what they are and where they came from? Linda Hall will show you photos of those unique specimens – many of which she grows in her home – and where they got their origin. The history of the African violet is important and she hopes to inspire you to keep the “oddities” alive.
Linda lives in a small town in Missouri and travels two or more hours to participate in local club meetings and events. She grows equal parts of African violets and other gesneriads (about 400 in all). She also enjoys growing the more unique and rarely seen gesneriads. Since she retired, she has been dabbling in hybridizing miniature sinningias and has four that she has named including ‘Raven’s Pink Lips’. Linda has been a member of both The Gesneriad Society and The African Violet Society of America (AVSA) since the mid 1980s. She is a master Gesneriad Society judge, a master AVSA judge, and a past president of AVSA. Locally, she belongs to the Heart of America Gesneriad Society, Omaha African Violet and Gesneriad Society, Sho-Me African Violet Club, and Missouri Valley African Violet Council. 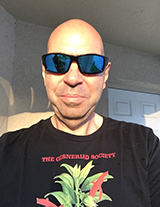 Jay Sespico’s program will center around the joy of knowing, growing, showing, propagating, and sharing gesneriads – and knowing the people who grow them. The majority of gesneriads are perennial herbs that grow in the tropics and subtropics, which means they are found in diverse natural environments, with a wide variety of form, color, and texture within the family. There is a plant for every personal taste as well as every growing situation. Another part of growing gesneriads that Jay enjoys is getting to meet and make friends with the most interesting people you might never have met if you didn’t share the same hobby. It will be a lively, entertaining, and informative multimedia program full of his best experiences with the plants and the people of our Society.
Jay Sespico has been interested in growing plants since he was a kid. Growing up in Buffalo, NY, where the winters were long and bleak, a prayer plant in the window of his room would become his secret jungle against the greyness of the long winter months. Jay had a short career in horticulture, which is now a major avocation. While his working hours are spent working in the Hillsborough County Sheriff’s Office, he spends a lot of time with gesneriads and gesneriad people. He is a Master Gesneriad Judge and the current editor of CrossWords, the newsletter of the Gesneriad Hybridizers Association. In addition, for the past five years he has been hybridizing sinningias.